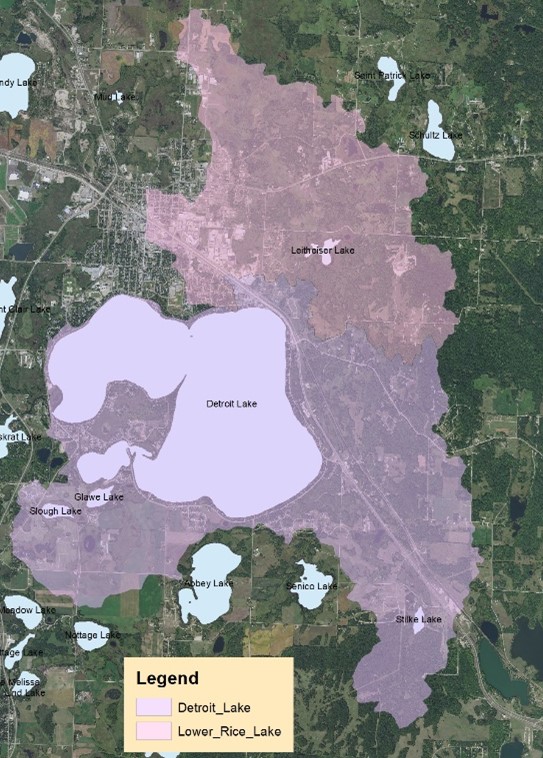 Detroit Lake, locally known as Big Detroit and Little Detroit, has two distinct basins that are separated by a shallow gravel bar. At 3,067 acres, Detroit Lake is the largest lake within the PRWD, and lies entirely within the City of Detroit Lakes municipal boundaries. As typical with urban lakes, its shoreline is extensively developed with residential homes, commercial businesses and some industrial buildings. The lakes are heavily used for game fishing, boating, and other summer and winter recreational activities.

There are two public accesses on Big Detroit, located on the north and south sides. The north side access is owned by the City of Detroit Lakes, however, there are short term plans for the MN DNR to construct a new access west of the Holiday Inn. In 2016, the south public water access on Big Detroit, owned by the MN DNR, was expanded and reconstructed to increase the parking area, provide stormwater management enhancements, and a designated area to clean and decontaminate water related equipment. There is one commercial marina on Big Detroit, operated by the Holiday Inn, and is currently permitted for 26 slips.

Little Detroit has a City Park mile long public beach that extends from Washington Avenue to Legion Road. Within the public beach area, the City of Detroit Lakes owns a  public water access located at the intersection of Roosevelt Avenue and West Lake Drive. Little Detroit has two commercial marinas – J & K Marina and Long Bridge which have 102 and 36 slips respectively. There are 6 Planned Unit Developments (PUD’s) with water access, totaling 82 slips.

The primary inlet and outlet for Detroit Lake is the Pelican River, flowing into the north side of Big Detroit and exiting the southwest side of Little Detroit. In addition to the Pelican River, Sucker Creek drains to the Lake along with two small wetland flowages, located on the southeast side of Big  Detroit. There are no water control structures, however, the lake level is controlled further downstream by the rock rapids between Muskrat and Sallie lakes.

Big Detroit is a dimictic lake while Little Detroit is polymictic, however, both exhibit mesotrophic characteristics with moderately clear water and support all recreation/aesthetic uses. Occasionally, after large rain events or during hot summer months, the lake becomes borderline eutrophic with visible algal blooms. This is due, in part, to Rice Lake, an upstream degraded wetland complex which releases phosphorous following large rain events. Urban and residential stormwater runoff are also contributors of nutrients to the lake.

With the continued development of Detroit Lake, there has been in increase in lakeshore alteration activities, including the removal of natural shoreline vegetation and installation of rock rip-rap. There has also been a noticeable increase in the removal of aquatic vegetation by both manual and mechanical means.

Aquatic invasive species have a large effect on lake health and in turn, lakeshore property value. Because of the high level of recreational use of Detroit Lake, this makes it very susceptible for invasive species introduction. The aquatic invasive plants Flowering Rush and Curly-leaf pondweed are both present in the lake, along with invasive invertebrates Zebra Mussels and Chinese Mystery snails. Both Flowering Rush and Curly-leaf Pondweed are assessed and managed annually via herbicide applications. The City of Detroit Lakes recognizes the economic value of the lake and assists the District in  managing invasive plants.

The MN DNR is very active in the fisheries management of Detroit Lake and the lake supports a healthy game fish population.