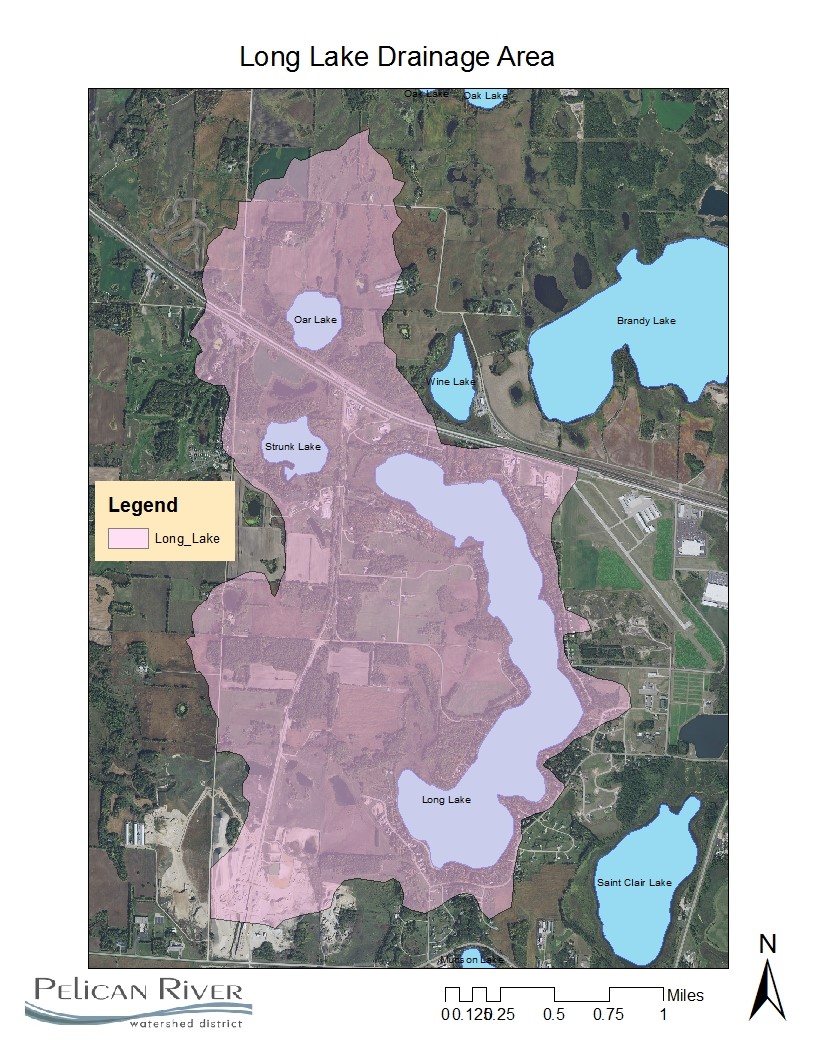 Long Lake is a 408-acre recreational development lake located at the head of its watershed area, with no surface water inputs, such as a river or a stream.  Long Lake is fed primarily by stormwater runoff and groundwater interactions. It is a narrow, deep lake, with a maximum depth of 61 feet and with 37% of the lake surface area classified as littoral. Though a small lake relative to others which attract a large clientele, its elongated shape gives it a shoreline length that is exceeded in the District only by Big Detroit and Melissa.

Long Lake has good water quality with annual phosphorus levels ranging from 11 ppb to 16 ppb, and water clarity between 12 and 19 feet.  10-year summer mean for phosphorus and clarity is 12ppb and 14.5 feet, respectively.

Long Lake is known for its abundance of Northern Pike and Bluegill. The 2016 assessment showed Pike catches were higher than average and higher than other ecologically similar lakes. While there are no special regulations for Long Lake, anglers are encouraged to release Northern Pike over 24 inches. Since 2001, a Walleye stocking research study has been underway to attempt to determine the best stocking method for a given lake type, despite the efforts, Walleye abundance has continued to decline.

Long is a deep lake, with nearly 37% (11,690 feet) of the shoreline sloping steeply toward the lake. The natural shoreline has been greatly modified, including installation of rip-rap, sand blankets, and vegetation removal. Of the 183 parcels surveyed in 2010, 30 contained a retaining wall within the shore impact zone. 96 parcels (52%) were recorded as having moderately to greatly altered shorelines, including 83 with rip-rap shorelines and 60 with beach sand blankets. 87 parcels (47%) of the parcels remained in a natural or minimally altered condition.

The City of Detroit Lakes annexation of Long Lake has provided water and sewer to the east and south sides of the lake with services on the north completed in 2019.  It is still unknown when City utilities will be connected on the west side of the lake. It is likely that improved water quality will continue to be observed with the transition from individual lot septic system to City sanitary sewers.

In the past 20 years, several resorts have been converted to large residential lots and all have been connected to City water and sewer. One RV campground still exists on the northwest side of the lake and it is likely that it too will be subdivided. The City of Detroit Lakes owns Long Lake Park which contains over 2,200 feet of shoreline, located on the east side of the lake that, except for the public access, will remain in its natural condition.  Along the west side of the lake, another parcel, owned by Concordia College, will also remain in an unaltered condition that will protect over 2000 feet of shoreline.

There is an active gravel mine in the southern portion of the Long Lake watershed.  In recent year, there has been interest by the company to expand to the north and west, closer to the lake. In 2018, Becker County denied a conditional use permit request to expand the mine, including gravel extraction below the water table.