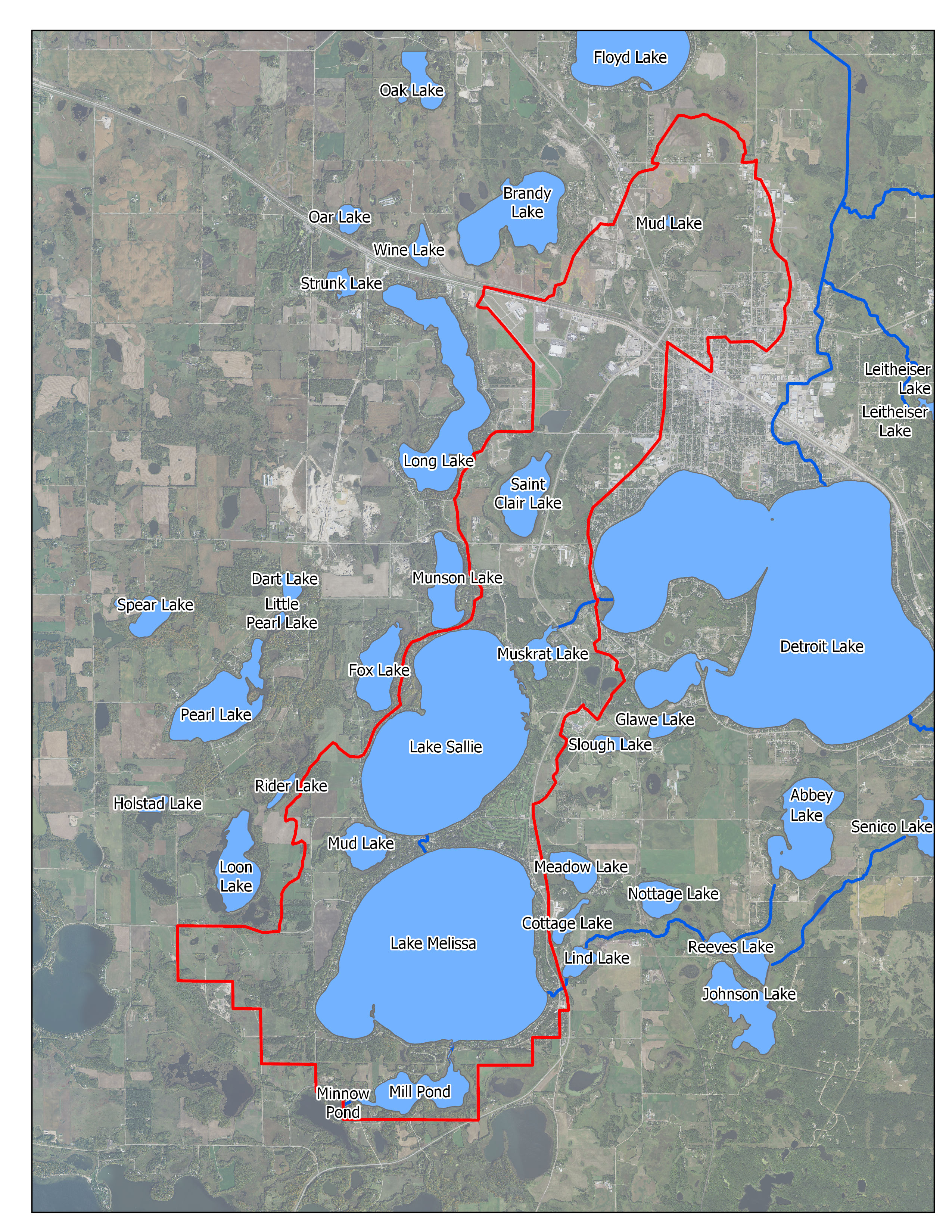 The Sallie-Melissa Water Management Area is comprised of 11,400 acres, including Sallie and Melissa Lakes, the Pelican River (downstream of Little Detroit Lake), Ditch 14, and several small lakes called St. Clair, Muskrat, Mud, and Mill Pond. There are also numerous wetlands, many of which are associated with Ditch 14 and have been drained or partially drained.

There has been increased development pressure in this WMA. There is dense development surrounding Sallie and Melissa Lakes, with relatively small lots and extensive shoreline modifications. Little shoreline remains undeveloped, and in recent years, summer cottages have been converted to homes for year- round use. There is also residential development along the south side of Muskrat Lake and near the western shores of St. Clair Lake. Sallie and Melissa are the largest lakes in the Sallie-Melissa LWQMA, and together they account for about 90 percent of this WMA’s surface water. Sallie and Melissa are relatively deep lakes and support important game fish opportunities and other recreational opportunities.

Water quality concerns in this WMA center around improving water quality in Lake Sallie and St. Clair. Lake Sallie is currently considered vulnerable to nutrient impairment, and experiences nuisance algae blooms most summers. Improving water quality in Sallie should also help water quality in Melissa because Sallie is just upstream of Melissa. Lake St. Clair is also listed as impaired by the MPCA for excess nutrients and has an approved TMDL. St. Clair’s poor water quality is largely the result of its use as a receiving pond for partially treated sewage effluent for over 50 years. Thick, phosphorus-enriched sediments in St. Clair release phosphorus to the water column and cause severe algae blooms. An alum treatment in 1998 reduced phosphorus loading from to the lake, but after 20 years, the effectiveness of the alum treatment may be waning, as phosphorus concentrations are increasing back to impairment levels.

Aquatic invasive species are another big issue in the Sallie-Melissa WMA, particularly in Sallie, Melissa and Muskrat Lakes. Invasive aquatic vegetation such as Flowering rush and Curly-leaf pondweed interfere with boating and swimming, cause some damage to shorelines, and invade desirable native plant populations such as Bulrush. Since the 1960s,the District has employed mechanical harvesting and herbicide treatments as a means of mitigating aquatic vegetation problems. However, research conducted by the District determined that harvesting exacerbated the spread of Flowering rush, so the District discontinued harvesting practices in 2016. Herbicides are used to effectively manage Flowering rush as well as Curly-leaf pondweed. Zebra mussels are also present in Lake Melissa, Lake Sallie, and Muskrat Lake.